In the past 30 years, global semiconductors have experienced six cycles, including the beginning of the PC era, the rise of Internet applications, the emergence of notebook computers, and the popularity of smartphones. Among them, the peak of the two-round semiconductor cycle in 2003-2004 and 2017-2018 has the factor of memory price boost. In 2002, the promotion of DDRS DRAM reversed the sluggish market and boosted the industry's high growth in the following year; in 2017, soaring memory prices made the memory sector contribute two-thirds of the growth in semiconductor sales that year.

According to the latest statistics released by the Global Semiconductor Trade Statistics Association (WSTS), global chip industry sales in the first quarter were $96.8 billion, down 12.9% year-on-year and down 15.5% from the previous month. Looking back at the history of the second generation of the semiconductor industry over the past two decades, it can be observed that in the previous 2001, 2009 and 2016 industries have experienced a recession, of which 2001 and 2009 are the global economic downturn.

According to IC Insight statistics, the semiconductor market in the first quarter fell by 17.6% year-on-year, which is more pessimistic than the WSTS statistics. At the same time, the quarter in which history has fallen by more than 10% in a single quarter usually indicates that the industry will face major adjustments during the year. Therefore, the current global semiconductor industry is undoubtedly in the process of a new recession. Historically, the semiconductor recession period is usually maintained for 4-5 quarters to digest inventory and adjust production capacity. Therefore, the second half of the year is expected to usher in a rebound in the industry's prosperity.

Memory, the largest product in the semiconductor industry with the highest product consistency, has historically experienced price fluctuations that have a very direct impact on industry growth. As memory has entered the oligopolistic competition, the release of capacity from leading companies will have greater impact.

Affected by the price of memory chips, the global memory leader's performance has declined. For this reason, Magnesium decided to simultaneously reduce the DRAM and NAND Flash production volume by about 5% and adjust the annual capital expenditure. Considering that the first quarter is the off-season demand, and the customer's inventory level is high, the demand will rebound in the second quarter, and the inventory will continue to be digested.

Semiconductor capital expenditure is a barometer of the industry's judgment on the degree of prosperity. According to IC Insight's forecast, after 2018 industry capital expenditures exceeded 100 billion US dollars in 2018, it is expected to maintain this high level in 2019 and 2020. 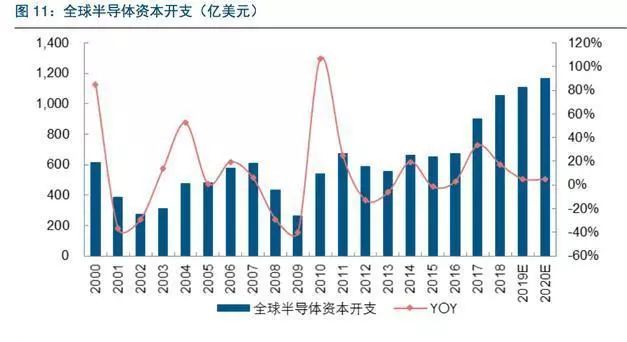 In particular, semiconductor devices and materials reflect the changing trend of the industry's climate from the upstream source. Take the leading company as an example:

ASML: In 2018, ASML, the global leader in semiconductor manufacturing equipment, shipped a total of 18 EUV equipment, including 6 in the fourth quarter, 5 in revenue, and 5 new orders. In 2019, ASML plans to ship 30 EUV equipment. Of these, 18 will be delivered to TSMC for the second-generation 7nm process (the first generation uses DUV technology) to meet the emerging high-end needs, and as the basis for the 5nm process; in 2020, ASML is expected to produce and sell 40 devices. 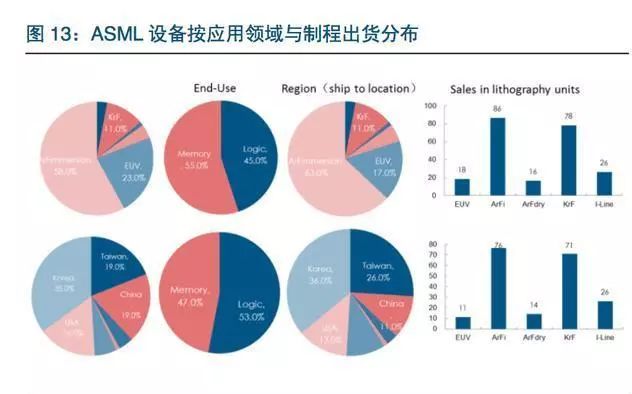 Tokyo Electronics: Tokyo Electronics Co., Ltd., a global semiconductor equipment manufacturer, expects CY2019 semiconductor front-end manufacturing equipment business: logic and foundry growth of 25% year-on-year, due to process improvement, 10% of processes above 10nm accounted for 50%; DRAM decreased by 30%, new equipment investment 60% will be concentrated in the 1ynm/1znm generation; NVM will fall by 50% year-on-year, and the overall manufacturing yield will increase, and the investment will be adjusted. Investment in semiconductor equipment was suppressed in the first half of the year under the influence of weak demand and trade friction, and is expected to resume growth in the second half of the year. 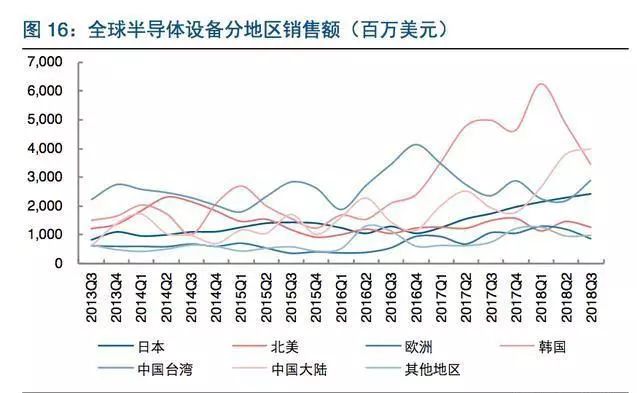 Although the current industry is at a low point of the economy, it will enter the recovery of the economy as the demand for replenishment in the peak season increases. At the same time, industry investment has not fallen sharply. It is optimistic about the recovery of demand. In the future, high-performance computing, 5G and smart cars will take the smart phone as a new growth point.

The industry is still in the growth stage, and overseas market capitalization continues to shift.

The global semiconductor industry is undoubtedly in a mature stage. As the effectiveness of Moore's Law continues to decrease, the product update iteration speed slows down. At this time, the industry concentration continues to increase, and the head enterprises have mastered high profits by virtue of technical barriers and scale effects. As the competitive landscape is more stable, the risks faced by enterprises are also decreasing.

Continental semiconductors are in the fast-tracking uptrend channel

In terms of products, taking memory as an example, due to the first-mover advantage and sustained capital investment, Japan, South Korea and the United States are currently in a leading position and belong to the country of creation. Currently, the three countries are mainly exporting. As an imitation country, China is currently in a state of large imports, and the industry is at a mature stage. However, the mainland semiconductor industry has its own particularity compared with the global. High-quality semiconductor design companies are emerging in China, and logic chips, memory chips, and power devices are catching up at high speed. Judging from the profitability of domestic high-quality leading enterprises, it has already passed the initial period of profit vacuum, and entered the growth period of profit release.

According to IC Insight's statistics, in the first quarter of 2019, HiSilicon successfully entered the top 15 global semiconductor companies (including foundries) revenue, achieving revenue of 1.755 billion US dollars in the quarter, an increase of 41%, reflecting the mainland semiconductor company The rapid growth and catching up.

Localization opportunities under supply contraction The mainland semiconductor industry is facing historic opportunities and challenges. Just like the former “going to IOE” strategy, semiconductor autonomy and domestic substitution have become the core logic for the long-term development of Continental Semiconductor. Taking Huawei's supply chain as an example, the list of 92 core suppliers includes 33 US companies, 25 mainland companies and 11 Japanese companies. American companies have maintained a strong competitive advantage in the upstream sector, especially in the semiconductor field.

The US semiconductor design company covers the core areas involved in a large number of intelligent terminals, from CPU, FPGA, RF to storage. In the past, mainland companies have difficulty developing deep cooperative relationships with large customers due to technical reasons and other reasons. As the largest consumer market for global smart terminals, China has a series of high-quality terminal enterprises such as Huawei, Haikang and Dajiang. The cooperation between local enterprises and downstream customers to the technical level will be accelerated under the external threat of “discontinuation”. Instead of becoming a cost-optimized after-supply supplier, localization of the supply chain will become a historic opportunity for mainland semiconductor companies. 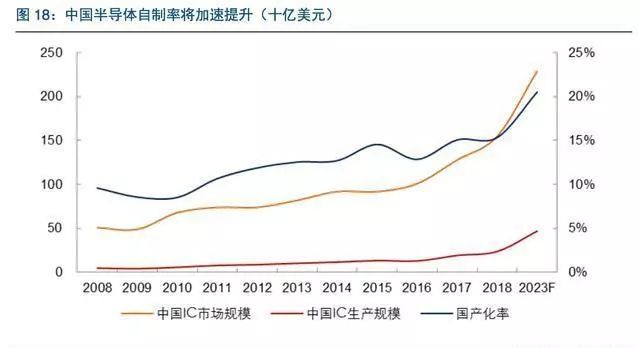 Looking forward to the second half of 2019, the semiconductor sector will welcome the collective listing of the science and technology board. From the current situation of the declaration, there is no shortage of high-quality targets in the past. The new valuation system, which is based on R&D investment, R&D team and core technology, is expected to emerge, which will enable the past market to adjust the PE valuation system of semiconductor companies, giving the technology-leading enterprises greater market value.

According to the figure, the three dimensions are selected.

Current semiconductor industry investments should be selected from three dimensions:

In the past two decades, the main driving force of the semiconductor industry is the explosion of intelligent terminals in the Internet era. A variety of intelligent hardware based on PCs and smart phones have driven a large number of high-end chips. The new driving force for the continued development of the semiconductor industry in the future is: large-scale computing and deep learning systems such as artificial intelligence (AI), automotive electronics-related applications, and Internet of Things (IoT)-related applications. 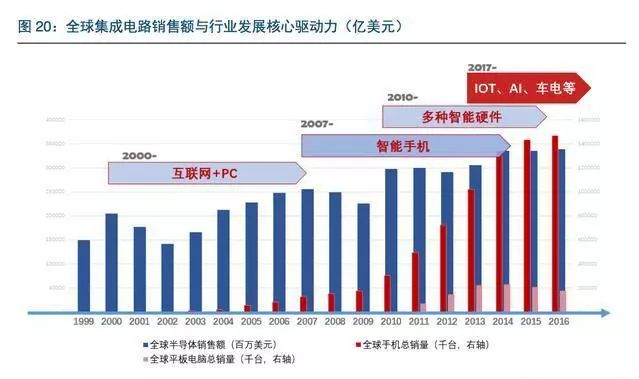 1) Artificial intelligence and high-performance computing The demand for the semiconductor industry is mainly the improvement of computing power and storage. Machine deep learning is supported by powerful computing power and requires a powerful processor. At the same time, the AI chip can also accumulate data with a large amount of non-volatile memory. Accenture predicts that the artificial intelligence chip market will grow to $35 billion in 2021. 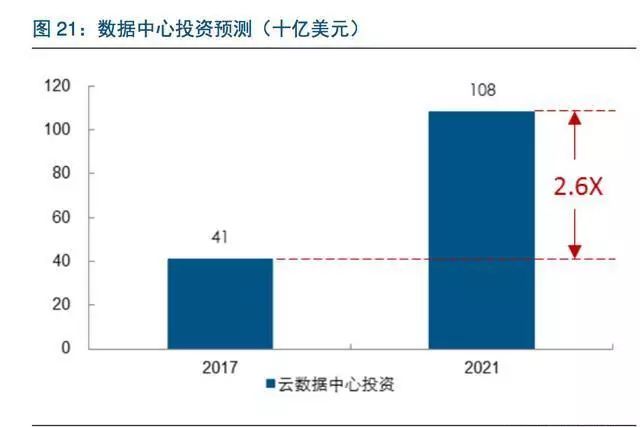 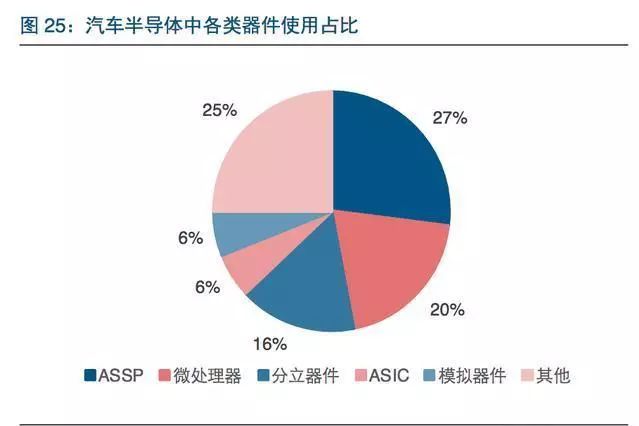 The trend of global development of new energy vehicles has been established, and the degree of electronicization of electric vehicles has increased. Power improvement increases the demand for power semiconductors, and the increase in value provides space for the upstream and downstream of the industry chain. Power semiconductors are moving toward high frequency, high reliability, low loss and low cost, and MOSFETs and IGBTs are key.

The domestic base is weak and the replacement space is large.

Due to the late start, the mainland semiconductor industry as a whole is in a catch-up state. Compared with the IC manufacturing and packaging and testing capital investment, the profit vacuum period is long, the IC design enterprise is people-oriented, making its market share change more flexible, investment. The potential is even more impressive. Combining the global semiconductor market share with the competitiveness of domestic companies, it has a growth path from 0 to 1 in products/directions such as power semiconductors (IGBTs), FPGAs, memories, and automotive semiconductors. 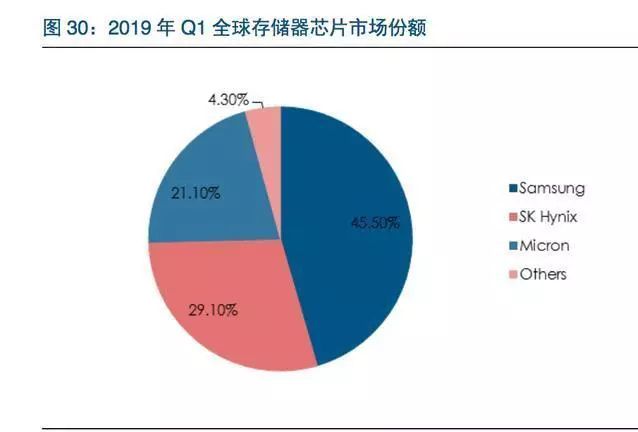 It is also necessary to fight the iron itself. In the direction of many domestically replaced spaces, only domestic enterprises with core competitiveness can go international. In recent years, mainland semiconductor companies have integrated global high-quality semiconductor resources through outreach mergers and acquisitions. Some companies have made great progress in technological strength, and their performance is expected to be higher. Growth is worth looking forward to.

(The above graphic message is organized from the network)